Formula one, often abbreviated as F1, and also known as "the pinnacle of motorsport" or "the highest category of motorsport" is the more popular type of racing car worldwide.  Each race is called a Grand Prix and the competition that groups them together is called the Formula 1 World Championship. Most of the tracks where the Grand Prix is ​​held are fixed races, although the  Urban racetracks are also used.  The vehicles used are single-seaters with the latest available technology;  some of these innovations were developed in Formula 1 and eventually found commercial use in cars, as disc brakes or turbochargers. 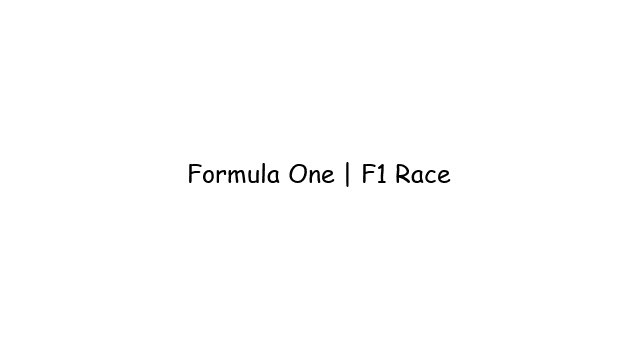 The beginnings of modern Formula 1 dates back to 1950, in which legendary teams such as Ferrari, Alfa Romeo and Maserati were involved.  Some teams have been pushed aside by successful newcomers such as McLaren, Scuderia Ferrari, Williams or Renault, who have won the team world championship multiple times.
The Grand Prix has its roots in organized motor racing that started in France in 1894. They quickly evolved from simple races between two cities into endurance races for both cars and people.  drive.  Innovation and driving techniques soon made it possible to reach speeds above 100 km/h.  However, because the races take place in open space, accidents often happen to both drivers and spectators.
After that, races were mainly held on closed long tracks on public roads, rather than on private circuits.  Thus, the Grand Prix Le Mans circuit of 1906, the Targa Florio circuit (150 km in the streets of Sicily), the German Kaiserpreis circuit (121 km in the Taunus mountains) and the French Dieppe circuit (77 km), were established.  used in 1907 Opened .  Exceptions, private races are the Brooklands English Oval, completed in 1907, and the Indianapolis Circuit, first used in 1909 with the first Indianapolis 500 race, and the Italian Autodromo Nazionale Monza, which opened its doors.  in 1922.
In 1922, Italy became the second country to organize an auto race called the Grand Prix, the latter being held in Monza.  In 1924, it was followed by Belgium and Spain, after which the use spread to other countries.  Strictly speaking, it is not yet an official championship, but there is a kind of rule for different races.  Just before the First World War, a rule-of-thumb appeared with some basic aspects like the size of the engine and the weight of the car, but it was not universally applied.
However, in 1924, many motor clubs joined together to form the International Association of Recognized Automobile Clubs, ("Association Internationale des Automobile Clubs Reconnus", AIACR), which  The Commission Sporting Internationale (CSI) is authorized to administer the Grand Prix and other international competitions.  Since the start of the Grand Prix, competitions have been controlled according to a strict set of basic rules (formulas) regarding aspects such as engine size and vehicle weight.  These regulations were practically abolished in 1928, when the so-called "Freedom Formula" was developed, when race organizers decided to control their events with practically no limits.  term.  Between 1927 and 1934, the number of races considered Grand Prix ranked increased, from five events in 1927, to nine events in 1929 and up to eighteen events in 1934, a level  maximum reached before World War II.